Click on the sound file above, then post your answer in the comments section below. Here are some photos to give you an idea. Only one is correct! 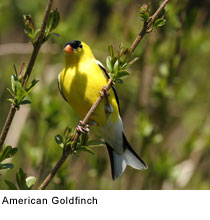 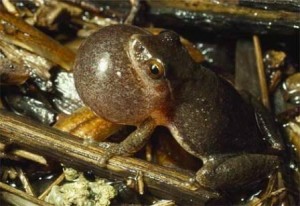 And the winner is: The Spring Peeper Frog!

What exactly is Earth Hour? It is one hour, 60 minutes, 3600 seconds, where you turn off your lights and televisions and video games.

What exactly can I do instead of watching tv? This is where you can get involved. Post here what you plan on doing this Earth Hour. Be creative! The most creative ideas will be featured here on our blog–complete with a photo of the most creative Earth Hour participant! Will it be you?

Destiny H. gave me this idea:

Put all your spring observations here on our blog! Write what you see, hear, smell, touch or maybe even taste! We will use the digital camera during club next week and take photos of our observations. How much fun this will be!

Red Maple Buds!! If you start looking around your neighborhood, you may see the red maple trees getting tiny buds on them. When they start to open, they look like flowers, don’t they? 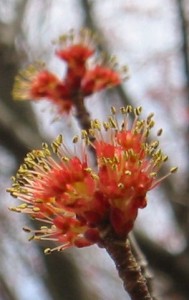 I wrote to Marie Winn, a famous nature writer last week to tell her about the red-tailed hawks that are nesting on the Franklin Institute. I was so excited when Ms. Winn wrote back and thanked me for telling her about the Philadelphia red-tails. A few days later, Ms. Winn wrote again and told me to check out her blog. When I did, I was so surprised because she wrote about our blog!

Here is the link to Marie Winn’s blog.  🙂 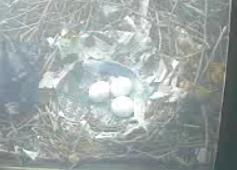 The information below comes from the Franklin Institute Website.

UPDATE: There are three eggs! The first egg arrived on Monday, March 9. The second on Thursday, March 12. The third on Sunday, March 15.

The Red-tailed Hawk (Buteo jamaicensis) is the most common hawk in North America. It is a large bird with a broad, red tail. The female is usually larger than the male. It appears that a male and a female are co-constructing the nest at The Franklin Institute. Red-tailed Hawks are monogamous, meaning that a hawk will choose one mate and stay with that mate for life.

The Red-tailed Hawk builds its nest in a tall tree or other elevated perch. The nest is a circular assembly of sticks and twigs, lined with softer pieces. It appears that The Franklin’s hawks have used newspaper scraps and feathers to soften their nest. Tree bark and leaves are also known to be used in nesting.

Red-tailed Hawks will lay a clutch of two to four eggs in March or April, depending on climate. (A clutch is the collection of eggs, kind of like a “litter” in other species.) For Philadelphia’s latitude, the eggs are likely to be laid in mid-March. In fact, the first egg arrived on Monday, March 9. The second egg arrived on Thursday, March 12. The third arrived on Sunday, March 15.

Incubation of the clutch lasts for 28-35 days, which means we may begin to see signs of hatching during the week of April 6. The female is most responsible for incubation, but the male will substitute when the female needs to exercise or hunt. About 43-45 days after hatching, the babies (known as nestlings) will begin to leave the nest to learn to fly and hunt. At 10 weeks, they will leave the nest for good.